Today is the day designated by our Prayer Book Calendar to commemorate the life and ministry of Saint Ignatius of Loyola.  Some would say it is his feast day upon which he is to be venerated.  Veneration is to be distinguished from worshipping  as the veneration of saints, is the act of honoring a saint, a person who has been identified as having a high degree of sanctity or holiness.  Worshipping on the other hand  is reserved only for the Lord Our God and his only Son Our Lord, Jesus Christ.

Evelyn Underhill and others have acknowledged that Ignatius life and teaching represents the best of the Counter-Reformation.  His Spiritual Exercises have provided many with a way of encountering Christ as an intimate companion and responding to his call: “Whoever wishes to come with me must labor with me”.

Like Wilber Wilberforce Ignatius believed in putting his faith to work.  Beginning his formal ministry as a layman he soon found that being an “unschooled layman made him suspect in the eyes of church authorities and led him at the age of 37, to study theology at the University of Paris in preparation for the priesthood.  We must remember that at this time the Catholic Church felt under attack by the protestant reformers who regularly attacked the priesthood and the ecclesiastical authorities as being corrupt and even “anti-Christ” It is only natural that the preaching and teaching of a layman might seem highly suspect.

Ignatius began life when he was born into a noble Basque family in 1491. In his auto biography he tells us  “Up to his twenty-sixth year, he was a man given over to the vanities of the world who special delight in the exercise of arms with a great desire of winning glory”.  During his participation in the Battle of Pamplona in 1521 he was badly wounded by a cannon ball which forced him into a long convalescence. Hospitals in those days were run by religious orders, and the reading material available to bedridden patient tended to be selected from scripture or devotional literature. This is how Íñigo (Ignatius) came to read a series of religious texts on the life of Jesus and on the lives of the saints. The work which most particularly struck him was the De Vita Christi of Ludolph of Saxony. This book would influence his whole life, inspiring him to devote himself to God and follow the example of Francis of Assisi and other great monks. It also inspired his method of meditation, since Ludolph proposes that the reader place himself mentally at the scene of the Gospel story, visualising the crib at the Nativity, etc. This type of meditation, known as Simple Contemplation, was the basis for the method that St. Ignatius would promote in his Spiritual Exercises.

While a theology student at the University of Paris in 1534 Ignatius and six companions , took vows to live lives of strict poverty and to serve the needs of the poor.

Almighty God, from whom all good things come: Thou didst call Ignatius of Loyola to the service of thy Divine Majesty and to find thee in all things. Inspired by his example and strengthened by his companionship, may we labor without counting the cost and seek no reward other than knowing that we do  thy will; though Jesus Christ our saviour, who liveth and reigneth with thee and the Holy Spirit, One God, now and for ever. Amen

This article is being re published due to an inadvertent  typographical error in the spelling of the saint’s name.  Much thanks to Fr. Akma Adam for pointing out the error and apologies to all who may have been misled.

Who you asked was “William Wilberforce”?  For Episcopalians the answer lies on page 310 of the publication titled Lesser Feasts and Fasts which is a publication cataloguing the lives and accomplishments of those christians who have been found worthy through acclamation and pronouncement of the Triennal General Convention of the Church to be designated as saints.   The process of choosing is much less formal than that of the Roman Catholic Church and more like that of the Orthodox Church.

William Wilberforce was an Anglican Christian  whose life refutes the notion that a politician (a statesman) cannot be a saintly Christian, dedicated to the service of 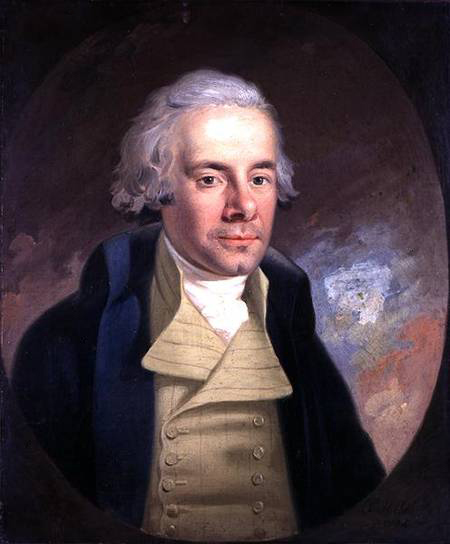 of humanity.  He gave himself astonishingly to the promotion of overseas missions, popular education, and the reformation of public manners and morals .  But, above all his fame rests in his persistent, uncompromising, and single-minded crusade  for the abolition of slavery and the slave trade.

Quoting from the Wikipedia :

Wilberforce’s involvement in the abolition movement was motivated by a desire to put his Christian principles into action and to serve God in public life. He and other Evangelicals were horrified by what they perceived was a depraved and unChristian trade, and the greed and avarice of the owners and traders. Wilberforce sensed a call from God, writing in a journal entry in 1787 that “God Almighty has set before me two great objects, the suppression of the Slave Trade and the Reformation of Manners [moral values]”. The conspicuous involvement of Evangelicals in the highly popular anti-slavery movement served to improve the status of a group otherwise associated with the less popular campaigns against vice and immorality.

Let us bless the Lord for christian saints like William Wilberforce.  A collect:

Let thy continual mercy, O Lord, enkindle in thy Church the never failing gift of love, that, following the example of thy servant, William Wilberforce, we may have grace to defend the poor, and maintain the cause of those who have no helper; for the sake of him who gave his life for us, thy Son our Savior Jesus Christ, who liveth and reigneth with thee and the Holy Spirit, one God now and forever.  Amen